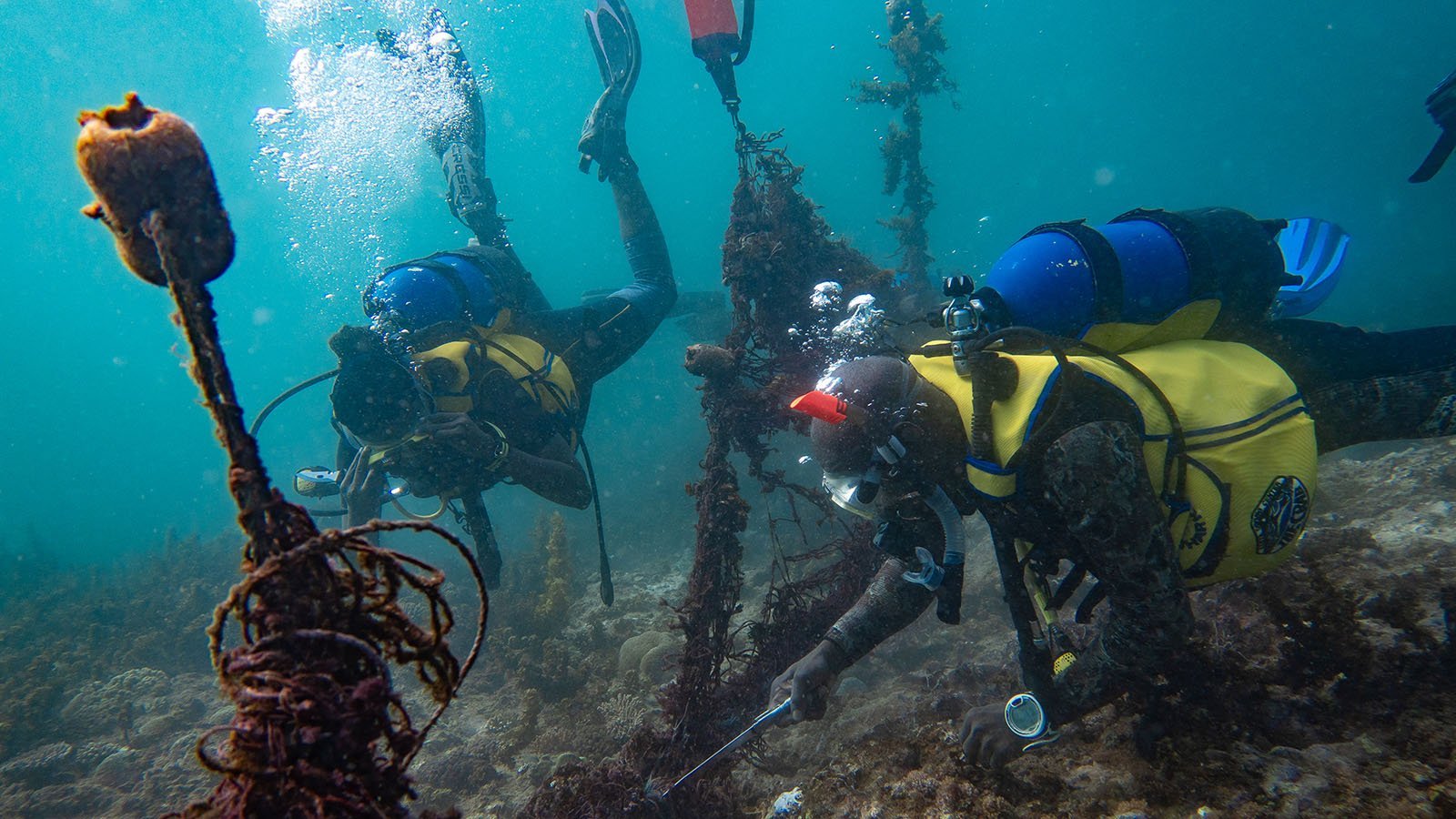 Ghost gear consists of fishing nets, lines and traps either intentionally or accidentally abandoned in our oceans. When ghost gear gets stuck on corals, it can smother them, break them and expose them to diseases. Corals can become so tangled that they cannot be reached by sunlight. Marine species are also likely to become entangled slowing them down, affecting their behaviour, including their migration, mating and even feeding.

Removal of ghost nets from our oceans requires commitment and teamwork. Earlier last week, a team of 4 divers managed to carefully remove 2 ghost nets from Diani’s reef, disentangling and releasing a few marine animals. One of the nets was completely abandoned and collapsed over the reef at 5-7m depth. It took the divers 2 days to remove the net from the reef. Fortunately for us, no marine animals were entangled but our beautiful corals were left damaged and broken.

The second net was sprawled from 5m to 15m depth over a distance of at least 30m. Unfortunately for us, this net was set. Word got out and soon the fisherman reported back that they needed assistance with removing their net. It had been left for too long and with the constant changing of tides, the base was completely caught up in the corals. During the disentangling process, we encountered a few crustaceans. Exhausted from their battle for freedom, the slipper lobster, crabs and even sea urchins were carefully set free. Also, plenty of hermit crabs were released before carrying the net ashore.

Marine fishing in Kenya is mostly small-scale, its carried out by fishermen who primarily head out to catch enough to feed their families – also known as Subsistence fishing. They employ labour-intensive fishing technology using canoes and simple fishing gears that include spears, set-nets, beach seines, gillnets, hand lines and traps. It supports extensive rural employment and in most coastal communities it is the main source of income as well source of protein for their families.

We only hope that fishermen in the future, unable to carefully remove their nets, or spot a ghost net will call on us to assist. It is our hope that our local fishing communities will continue to work with us in taking care of our beautiful marine habitats. Working together with our conservation partners and fishing communities we can work together in banishing ghost nets in Diani and protect our oceans. Also, in the near future, we hope to work closely with the Marine Education Centre in their bid to spread awareness among the small scale fishers along Diani in developing more sustainable fishing gear and practices!

The protection and monitoring of shallow-water ecosystems off Diani Beach Kenya:...